In 2009 Governor Paterson announced the $1.3 million award from the New York State Department of Transportation Multi Model grant to Wyoming County. The WCIDA applied for the grant funds on behalf of the county because of the need to move railroad tracks in Arcade and Attica. By moving the tracks in Arcade it would allow Koike Aronson Manufacturing the space it needed for continued growth at its facility and ultimately the creation of dozens of jobs. The moving of the track in Attica was necessary to accommodate the loading and unloading of rail cars closer to Hillcrest Industries while moving the activity away from the residential area. Included in this project are the plans for a trans-loading and unloading facility which can be accessed and utilized by many companies in the area. By providing access to the railroad it will enable businesses to cut transportation costs and be more competitive in their industries.

After much delay due to the recent recession, the approval to release the funds and allow the projects to move forward was granted in August of 2011. Since that time the tracks have been moved in Arcade and Koike Aronson Manufacturing, Inc. has started their expansion project utilizing the new space as promised.

The project plan for Attica has been changed and a new site in Gainesville has been identified. Work is underway to develop a plan to install a rail spur and unloading facility.

Koike is a leading supplier of advanced cutting machines, welding positioning equipment, portable cutting/welding machines, and gas apparatus. The WCIDA provided property and sales tax incentives for its 20,000 square foot expansion project in 2006 and in 2008 completed a demo room. Koike is currently putting on a 30,000 square foot addition which was only made possible by the moving of the rail tracks behind the facility. The funding for moving the tracks was included in the Rail Initiative Grant. 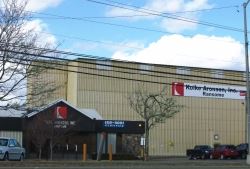 In 2005, the M&T Trucking Company in the Town of Covington was looking at moving their operation to Monroe County to enable them to expand and create 50 new jobs. The WCIDA stepped in and, working collaboratively with the New York State Governors Office for Small Cities and the Town of Covington, was able to obtain a $375,000 grant for the company and retain the business in Wyoming County. M&T Trucking stayed in Wyoming County and with their new growth and success they were able to create more than 80 new jobs.